With video games it’s common for levels to increase in difficulty as the game progresses. I knew this  was the case for games as old as Pac-Man. But when I read through Jamey Pittman’s Pac-Man Dossier, I was surprised how many variables were tweaked to give each level its unique challenge. 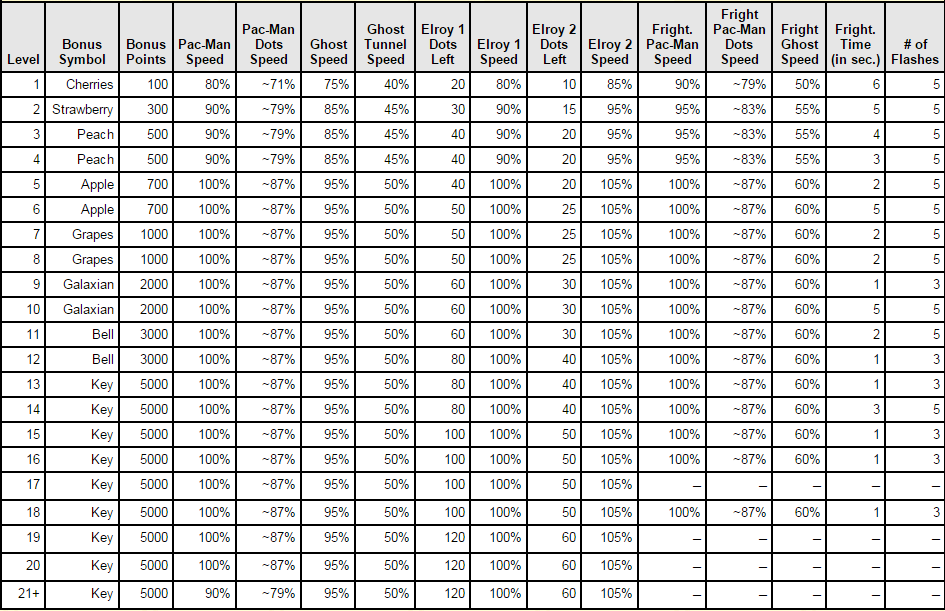 Out of the 21 levels, only a few pairs of levels present an identical gameplay challenge. Otherwise, one of the game’s 13 gameplay variables is tweaked.

Tweaking these variables across the 21 levels in Pac-Man gives players more comprehensive exposure to the design space. Players can better learn Pac-Man’s gameplay by progressing through the game and refining their strategies as the challenges get harder.

When Pac-Man eats an Energizer Power-Pellet his speed changes. In the early levels his speed increases to help players chase vulnerable Ghosts. On the other hand, during this “fright” time Pac-Man’s speed is lowered while he eats Dots. Between levels 4 and 5, the difference of Fright Pac-Man’s dot-eating speed is 4%, a change so subtle that players may not perceive it consciously, but I’m confident that players can feel the difference.

All of the variables listed above control gameplay elements that have clear feedback. Pac-Man and Ghost speed can be discerned by simply observing their sprites for a few seconds of motion. The number of times frightened Ghosts flash before becoming deadly is either 3 or 5; It would be more difficult to determine exactly when Ghosts turn deadly if the number of flashes ranged from 1-5. 1-2 flashes doesn’t give enough warning. 6 flashes is too long. Keeping it 3 and 5 gives players who anticipate a 3 flash change to react accordingly by the 5th flash.

Many variables are tuned to be easier for players to keep track of mentally. Ghosts flash an odd number of times before becoming deadly, which helps musically-inclined players who are used to musical phrases ending on an even beat. Fright times are whole numbers measured in seconds,  which makes counting easier. Blinky, the red Ghost, speeds up two times in a level based on the number of Dots left in the maze. The speed values for Blinky are all divisible by 10. Pac-Man’s normal movement speed is also divisible by 10. Pac-Man’s speed matches Blinky’s, a design choice that allows Blinky to chase Pac-Man effectively and makes the tiny speed boost granted when Pac-man rounds corners more obvious. However, when there are very few Dots left in the maze and Blinky moves at his fastest, his speed is consistently 5% faster than Pac-Man’s (except on the final level of difficulty where it’s 15% faster). This consistency among all the other changing variables in Pac-Man’s difficulty design goes a long way in making the interactions easier to learn yet variable. No matter how Pac-Man’s speed changes between levels, players can rely on the ratio of speed between Pac-Man and the most aggressive Ghost, Blinky, to be the same for 20 out of 21 levels.

The most interesting piece of feedback design is the classic “waca waca” sound effect that plays when Pac-man consumes a Dot: Pac-Man’s slight speed change when rounding corners while eating Dots can be can be seen as well as heard! Listen here.